A belated happy winter holidays and happy new year! Guh, has it been over a month already?

A quick game of catch-up

I spent Xmas and rang in the new year with my relatives, squeezing in a week’s break before heading back to work within the first week of 2022.

Being among the most tech-savvy in the teachers' room, I was asked to conduct a workshop to cover some key features of our school laptops (which I was happy to do but really wish I’d gotten a bonus or something for…).

I pierced my own ear, my rook; it was harrowing and bloody and a ton of fun!

Today, I just want to reflect on my new year’s day, and how in shaking hands with the new year, I had one hand reaching into a past much older than I.

On January 1, we visited a shrine and our family grave before anybody came over. In Japanese, it’s called hatsumoude: your first shrine visit of the new year. You toss some coins in the offertory box at the shrine and pray for a good year (don’t forget to say your address, since the gods are very busy!). You also pull an omikuji, or a fortune, which ranges from daikichi — great fortune — to daikyou — great misfortune. I drew daikichi! 🥳 Religion in Japan isn’t quite as rigidly defined as it is in many western countries. Buddhism and the indigenous Shinto religion are well-represented through temples and shrines, respectively, but not many people will identify strictly as “Zen Buddhist” or anything. In many cases, religious practices in daily life are done with much more focus on the material, on luck and fortune, rather than carrying loftier tones of morality and salvation. But that’s a whole other post waiting to be written, isn’t it?

As for the graves, we visited three: ours, that of my grandfather’s brother, and that of a very close family friend. The graves, in the yard of the local temple, sat beyond rails with buckets and scoops set near faucets offering frigid, clear water. My uncle filled up a bucket while my aunt and cousin went ahead, fishing out a small jar of sake and a bottle of hot lemon tea for my grandparents. We poured water over the grave, wiped it with a sponge we’d brought, and lit our own candles and incense. I was struck by that feeling that often suns itself atop headstones, that wends its way up your arm and into your heart when you touch the marble. That feeling that chills you — oh, they’re gone, and one day I’ll be gone, and — then warms you — one day maybe someone will touch my headstone and smile like this.

My great-uncle’s grave stood nearby, still in early morning shadow. It was speckled with dirt. The shallow divot for water had a crimson crust on the bottom that we sponged away. My aunt clucked her tongue while I felt a chill run down my spine. His family doesn’t visit much anymore, my uncle said half to himself. Nobody to clean the grave or leave offerings or remember. Except us, it seemed. The family friend’s son is still in the area. A bright bouquet sat in a thin glass vase, the cut stems still bright green. We walked home, our hands icy from the washing water, and prepared for jesa.

Jesa is an ancestral rite practiced in Korea. There are various different kinds, but they all entail remembrance of one’s ancestors with presentation of food and drink. You can check out all the nitty-gritty details on Wikipedia.

In perusing the wiki page just now, I noticed a lot of practices that we didn’t do. Our jesa took place on new year’s morning. We bowed two times instead of four; my uncle and (male) cousin first, then me and my aunt. Nobody left the room. Is this order common in the peninsula today? Or is it a diasporic thing? Or is it just a family thing? I found my gaze resting on the spoon handles towering from mounds of steaming white rice like two graves on a high hill. How did my grandparents practice jesa? Will my nieces and nephews offer new year’s feasts to my uncles and aunts someday?

Multiple times throughout the day, my relatives commented on how small the meal was. In his day, my uncle said, they had to borrow tables from their cousin’s house next door to fit all the food! He rattled off names with smiling, faraway eyes; on a video call later, my mom recounted the same, along with their causes of death. It’s not uncommon for Zainichi Koreans to have family histories of physical and mental illness; as anybody of a marginalized group will tell you, we tend to start a little lower on Maslow’s pyramid, and that takes a toll. Many of my (great-)aunts and uncles died young or lost touch with the family. So whereas the Kim house of 1974 may have hosted eight or ten families on January 1, this year, we hosted two.

Still, I was delighted to meet more relatives: my mom’s cousin and his family. He said I talk like my mom — quite a few people say that, actually. I find it interesting not least because for most of my life, I never spoke to my mom in Japanese. Nevertheless, it’s a touching reminder that, yeah, they don’t share my curly hair or flat nose, but we share a language and loved ones. We’re blood.

I ended the evening by going downstairs to avoid getting overstimulated by a heated discussion about real estate (or something). My cousin lay on the floor playing some game on his phone. I settled into my uncle’s massage chair and drifted off the the faint sounds of swords and spells. When I woke up, the sun, the food, and our relatives were all gone. And soon, so was I, a paper bag full of snacks and leftovers in hand, a bit of new year’s magic to take with me into tomorrow. 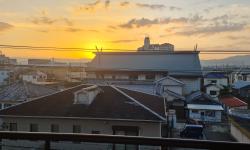 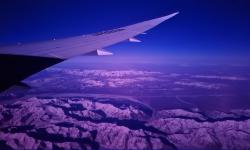